Once upon a time there was a woman named Annie Londonderry. Her real name was Annie Kopchovsky, but that's not important.

Annie Londonderry was a bitchin' bicycling diva. This is Annie, alongside her trusty steed:


Our bicycling diva, Annie, set out to prove that a woman could ride around the world on a bicycle. (Thomas Stevens was the first man to cycle around the world. He spent two years accomplishing the deed on a penny farthing, completing his journey in 1886.)

The year was 1894. Annie left her husband and three children to girdle the world around.

At the time that Annie left for her adventure, bicycles were all the rage. They were crazy popular! Just to give you an idea, in the late 1880s, more than one-third of patent applications were related to bicycles, and there were more than 3,000 companies in the US that were in the bicycle business. Holy friggin' shmoly!

A minor tangent, here, but didja know that Orville and Wilbur Wright (that's right, the airplane dudes) had a bicycle rental, sales, and repairs business called Wright Cycle Company? As it turns out, the bros leveraged the profits from their cycle company to finance their airplane shenanigans. If it weren't for the bicycle, who knows how the aviation business would have developed! And if weren't for Wright Cycle Company, who knows if reverse-threaded pedals would exist today! Thanks, Orville and Wilbur.

(Doesn't everything lead to death in the long term? And what about those long days women spent in the factories, hovering over sewing machines in less-than-ideal conditions? That wasn't harmful for women?)

There was also concern that riding a bicycle was sexually stimulating! Gasp! "Hygienic saddles" (i.e. saddles with cut-outs) were developed to help alleviate the stimulation. (Now, I can't speak for other ladies, but straddling a saddle and experiencing road vibrations doesn't quite do it for me.)

Truth be told, bicycles helped women make leaps and bounds. Susan B. Anthony put it best when she said that "bicycling has done more to emancipate women than anything else in the world." Bicycles gave women a sense of confidence. Of strength. Of freedom. Hell, bicycles even resulted in drastic changes in acceptable fashion and played a huge role in the women's suffrage movement.

I digress...back to Annie, our bicycling diva.

Peter Zheutlin tells the story of Annie's world-girdling adventure in his book called "Around the World on Two Wheels: Annie Londonderry's Extraordinary Ride." 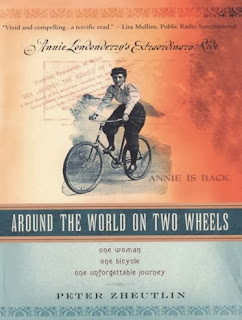 The book explains that while Annie indeed circled the world, she spent more time aside the bicycle rather than atop it. As it turns out, she had "a casual relationship with the truth and [she] was an inveterate storyteller." Some of her tales were considered to be "downright implausible," "utterly fantastical," and "positively vaudevillian."

Nonetheless, the public was fascinated with Annie. Regardless of how many miles she logged on the bike, Annie was still one helluva biker chick with ball[bearing]s of steel.

The author does a great job painting a verbal portrait of our swindling bicycling diva. While I appreciated learning the history of Annie, the book could have been a quarter of its length and still have been explicitly clear that Annie was a hustler. A fraud. An illusionist. Suffice it to say, the book was quite repetitive.

What I appreciated most about the book was the Afterword, as it told a unique story in and of itself. The author, Peter Zheutlin, gives background on how it was that he came to research and write about the life and unforgettable ride of Annie.

You see, Annie was Peter's great-grand-aunt. In the Afterword, Peter tells the story of Mary, Annie's granddaughter and Peter's long-lost cousin. Peter only learned of Mary when he visited Annie's grave; Mary was listed as the contact person in Annie's cemetery records.

Peter wanted to speak with Mary to gain her input on Annie's life. Peter contacted Mary via letter. He wasn't sure how Mary would respond to receiving a letter from a stranger (albeit a blood relative) who wanted to prod around the family history.

Alas, the letter was well received. As Peter writes in the Afterword, "Mary told me that my interest in Annie, and in recovering her history, had lifted a burden. For decades Mary felt she was supposed to do something with Annie's legacy, but didn't know what. Now, I had come along out of the blue, a blood relation no less, to provide the solution...If you write my grandmother's story,' Mary said when we first spoke, 'it will be the fulfillment of my dreams!' With those words, I was truly on a mission."

Despite Annie's casual relationship with the truth, she was nonetheless a cycling diva. And who knows if we'd know anything about her if Peter didn't have the curiosity and the gumption to research his great-grand-aunt and to capture her legacy in written form. Thanks to Peter's book, Annie's extraordinary ride around the world on two wheels has not been lost to history.

The written word is a powerful way to capture legacies. As are photos. And videos. And the like. I am by no means a cycling diva. But I hope that someday the stories I capture in my blog (though they aren't nearly as exciting as Annie's) will help to share my legacy.

My Mom, on the other hand, now she is a cycling diva. She only began touring in her 60s. Fortunately, she has been capturing the stories of her bicycling adventures in written form. It's cool to know that these stories will last beyond a lifetime.

Now's a good time, me thinks, to show you some photos from a few overnight bike trips I've done with Mom in the Pacific Northwest.


Yeah, so both Annie and Mommy are bitchin' cycling divas. And both have amazing bicycling legacies. At least Mom's stories are all downright plausible, utterly fantastic, and positively non-vaudevillian.

Unfortunately, Mom has not (yet) made her tales available for public consumption. But, if you'd like to meet some other modern-day female cycling divas, check out the Women on Wheels website for WOW-ing tales of solo women partaking in extraordinary travels on their two-wheeled steeds. (Thanks, Jeff, for turning me on to WOW.)