Hear me shout from the top of my lungs: I am car-free! And it feels so good! 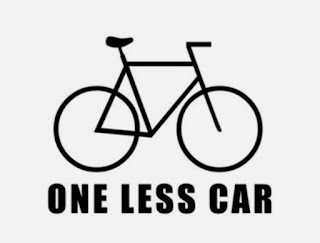 I have owned two cars in my life. The first was a Saturn, which I bought when I moved to Arizona for grad school. The car was a valuable tool for establishing my identity as a young adult. I replaced the Saturn five years later, in 2005, with a Toyota Corolla. With a six CD-changer and a higher quality stereo system, my new car was more suitable for commuting the 40 miles to-and-fro my job in the Chicago suburbs.

Oye! Those were the years when I easily swallowed the American way. Having a car was simply a fact-of-life, as was upgrading automobiles every few years to capitalize on bigger'n'better'n'more-comfy.

When I moved to Seattle in 2006, my life became less car-centric. The horrific city traffic, the hard-to-come-by parking, and the free bus pass I was given by my school (and later by my employer) made public transportation a no-brainer. Within a few years of becoming a Seattleite, bicycles surpassed busses as my main form of transport.

In 2011, I gave serious thought to becoming car-free. In the first year and a half of owning my Toyota, I had amassed 20,000 miles on the car, primarily from commuting to and from my job. In the next five years, I had driven the car only 8,000 miles. These miles were accumulated with short incremental errands here-and-there, various excursions to play in the mountains, and an occasional road trip farther beyond. Was it worth owning a car? 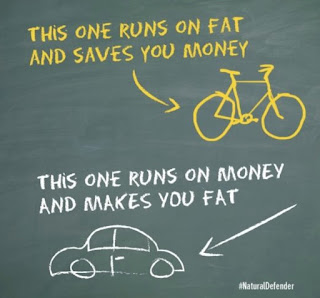 In answering this question, I knew finances would be a significant consideration. I began to track my car's operating expenses -- insurance, registration, gasoline, maintenance. My costs averaged $1,400/year (plus or minus a few hundred dollars). I also started an Auto Diary in which I logged the dates I drove, beginning and ending odometer readings, destination, and reason I traveled by automobile. With the help of statistics, I was hoping to clearly demonstrate that going car-free made sense.

According to my Auto Diary, I drove:
I visualized a jar on the dashboard. With each mile I drove, I imagined dropping 50¢ to 75¢ cents into the jar. Yikes, car ownership was pricey!

The majority of the entries in my Auto Diary indicated that I drove because I had "bike issues," was "too tired," or was "too busy." A surprising number of entires memorialized drives to pick up pizza for dinner because I was in a "bad mood." Only rarely did I drive because of inclement weather.

Though I stopped tracking my mileage in 2015, I held on to the Auto Diary. Flipping through its pages became a means of walking down memory lane. Some of my favorite entries include:

Truth be told, my main justification (read: "excuse") for keeping my car was that I regularly purchased heavy bags of food and litter for my cats; transporting these bags would have been difficult via bicycle or public transport.

How ludicrous to own a car merely for transporting bags of pet food and litter! At least I can take comfort in knowing I am human. After all, it is human nature to justify irrational decisions. Clearly my rationality was nonsensical; though my journal shows I became cat-free on 3/12/2013, I held on to my car for another 5 years, 8 months, and 18 days.

In the end, the Auto Diary, the calculation of per-mile operating costs, and the no-longer relevant irrational justification were of little value in convincing me to get rid of my car. Rather, all it took was a subtle nudge, seven years later, by a bicycle-traveling and car-free friend of mine, Kate. Sandwiched between a random array of topics in a casual conversation, Kate provided the inspiration, encouragement, and support I needed to go car-free.

Within a month of my perfunctory car-free conversation with Kate, I had signed the title of my car over to a new owner. The odometer on my thirteen year-old Toyota read 54950.


It is worth noting that as I have been typing this post, I have been glancing up from my laptop to monitor the neighbor through the window. When I first noticed the neighbor, she was sitting in the driver's seat of her Toyota Prius, door ajar, trying to turn the engine. Her frustration was palpable. An hour or so later, her head was buried beneath the hood, a container of engine oil in her hand. Now, a man in an obnoxious yellow vest kneels aside the front wheel, preparing the Prius to be hoisted onto a tow truck. This vignette, being played outside the window, is blatant validation of my decision to go car-free.

Thank you, Kate, for your nudge. It feels incredibly freeing to be car-free.
Email ThisBlogThis!Share to TwitterShare to FacebookShare to Pinterest