Within a few days of arriving in Quetzaltenango, the owner of the yoga studio, Kevin, asked me if I was familiar with bitter fruit. Hmm, bitter fruit. Like grapefruit?

Nope! Kevin was referring to bananas.


Kevin then handed me a bootlegged copy of Bitter Fruit: The Untold Story of the American Coup in Guatemala, by Stephen Schlesinger and Stephen Kinzer. The book was lent to me with an open return date. Books about history, war, and politics typically don't hold my interest, and so I was afraid I would be returning the book -- unread -- at the end of my three months in Guatemala.

Desperate for a cerebral break from learning Spanish, I picked up the book a few days later and read the introduction. While it's true that history, war, and politics typically don't hold my interest, stories of corruption captivate me. Bitter Fruit is all about corruption. The book reads like an intriguing John Grisham novel. The only difference being that Bitter Fruit is non-fiction. 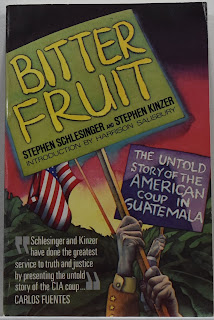 The plot follows a familiar template:


In the case of Bitter Fruit, the expanded plot goes roughly like this:


Guatemala has bananas. Bananas equal money. The US wants money, and so the US wants Guatemala's bananas.

In the early 1900s, the US-owned United Fruit Company (UFC) establishes itself in Guatemala. With time, it comes to own 550,000 acres of farmland (42% of Guatemala's arable land). It also develops a monopoly on an extensive network of railroads and ports. The money is good; life is good. Three cheers for exploitation!

In 1951, President Jacobo Arbenz comes into office. In the interest of progressing Guatemala from quasi-feudalism to capitalism, Arbenz passes a law that expropriates uncultivated sections of large plantations and redistributes the lands to local peasants. Under the law, the Guatemalan government expropriates 230,000 acres of land from UFC. The government provides compensation by paying UFC $627,572, the value of the land UFC claimed it owned based on tax payments. Royally pissed off, the UFC argues that the land is actually worth $15,854,849. Them bananas ain't so profitable anymore; life ain't lookin' quite so shiny. Time to flex the military muscle!

As many US officials have a financial stake in UFC, the company lobbies for intervention. The US malevolently fabricates an anti-Guatemala campaign, costuming every act of nationalism, economic independence, and progressive reform under the guise of communism. The US government backs a CIA operative to muster a coup, overthrow Arbenz, and bestow Guatemalan power to a more "manipulatable" leader. The rest is history.


My favorite line in Bitter Fruit is spoken by Enno Hobbing, a journalist-spy hired by the CIA to help shape the post-coup government. After Arbenz resigns, Colonel Carlos Enrique Díaz assumes the role of provisional president. It quickly becomes evident that Díaz's MO is not aligned with US interests. After just two days in office, Díaz is booted. Hobbing tells Díaz, "Colonel, you're just not convenient for the requirements of American foreign policy."

Let me repeat that for you: "Colonel, you're just not convenient for the requirements of American foreign policy." Wow! Just wow!

In the 35+ years since Bitter Fruit was published, it has become a textbook case illustrating the relationship between the United States and developing nations. You could easily do a "find and replace" for the dates and names in Bitter Fruit and have yourself a good read about the US's involvement in Vietnam. Given the current situation in Venezuela, I fear this same plot will be reproduced once again.

I don't know about you, but generic plots bore the hell out of me. In the old spaghetti western genre, you have the good guys versus the bad guys. In the romance genre, you have the Romeo & Juliet plot. Boooo-ring! Why do politics seem to adhere to the same plots of self-centeredness and corruption? (This is, of course, no bash to Bitter Fruit -- the book was stellar.) I like variety. Something different. I'm really itching for a new plot in the genre of world politics. How about a story that tells of honesty, mutual respect, and consideration of the well-being of the world as a whole?

In 2006, ten years after the end of the Guatemalan Civil War, the United Nations (UN) and Guatemala signed a joint agreement that created the International Commission Against Impunity in Guatemala (CICIG). CICIG's purpose was to investigate and prosecute crimes and corruption in Guatemala. CICIG's term was scheduled to expire in September 2019. In September 2018, Guatemalan President Jimmy Morales announced he was not going to reauthorize the commission. Then on January 7, 2019, two weeks before I left for Guatemala, Morales suddenly and prematurely terminated CICIG. Morales sent military forces to the CICIG headquarters and demanded that the UN body vacate the country within 24 hours. The UN rejected Morales's termination, and Guatemala's highest court ruled against it as well. The termination of CICIG sparked an institutional crisis in Guatemala -- hence the demonstrations and roadblocks.

What's important to know is that Morales's brother, Morales's son, and Morales himself were all under investigation by CICIG. Jo-Marie Burt, from the Washington Office on Latin America, explained Morales's termination of CICIG as follows: “What’s driving this is the fact that the person sitting in the president’s office is himself corrupt and is surrounded by a series of other corrupt individuals for whom the CICIG represents an existential threat.” Smells like corruption to me -- discredit and disband any and all efforts that might investigate your own wrongdoings and result in your own demise.

Sound familiar? Yup, I, too, see parallels to the current administration in the US. I guess we have ourselves yet another predictable plot in world politics!

Please, no more bitter fruit. The plot line is getting old.

I travel for many reasons. One of the reasons I travel is to witness first-hand that the world does not revolve around the United States, even though we seem to have our blood-stained hands in everyone else's business. Travel has taught me that at the end of day, it all boils down to being human.

I dream of a world-wide political system that writes a new plot centered around our shared humanity. A system that recognizes that we all co-exist on this one planet. A system that recognizes that the political boundaries we impose are arbitrary and, in the whole grand scheme of things, fairly futile. Though we may speak different languages, wear different clothes, and practice different customs, we are all made of flesh and bone. We all seek life, liberty, and the pursuit of happiness.

The whole Vietnam saga never interested me much until I saw Blood Road late last year. This documentary follows Rebecca Rusch on her 1,930km bicycle ride along the Ho Chi Minh Trail. The purpose of her trip is to learn more about her father, a US Air Force pilot, who was shot down and killed in Laos during The Vietnam War. You can view Blood Road here.

This documentary does a great job illustrating the human suffering that resulted from Vietnam -- both in southeast Asia and abroad. What I found particularly interesting was how the landscape suffered, too. The footage shows how the countryside bears scars from The Vietnam War -- new bodies of water have been created by bomb craters and tips of pointy rock formations have been obliterated by artillery. We humans have a surprising capacity for horridness.
Email ThisBlogThis!Share to TwitterShare to FacebookShare to Pinterest