I had biked through Grand Teton and neighboring Yellowstone National Parks on numerous occasions — once on a solo trip and three times leading trips for Adventure Cycling. I felt as though I knew The Tetons fairly well. And I did, as well as one can from the seat of a bicycle. But never had I ventured beyond where my steel steed could take me. So when my adventure partner, Alan, asked whether I'd be interested in backpacking the Teton Crest Trail, I gave him a hearty affirmative. "Sure thing, Alan!" It would, after all, be a pleasure to experience the Tetons from within the crest rather than gawking up at them from 4000 feet below.


The Teton Crest is often considered one of the top backpacking trails in the United States. More than 40 miles in length, the trail traverses the Grand Teton National Park, Jedidiah Smith Wilderness, and Bridger-Teton and Caribou Targhee National Forests. The route offers a lovely array of jaw-drop vistas, from granite peaks and wide-open meadows to aquamarine lakes and magnificent evergreens. To top it off, The Teton Crest would be painted in a rich palette of autumn colors when we planned to backpack the trail at the end of September. Yup, I'd be up for that!
The park requires a permit to camp in the backcountry. The permit window for the 2022 season opened January 5th at 8am. When Alan forwarded me the permit, I chuckled when I saw it was time-stamped just minutes after the window had opened. One thing is for certain: Alan don't mess around when it comes to permits. No siree!
As Alan had backpacked The Teton Crest the summer before, he was familiar not only with the route, but also with ideal places to camp. A couple of the sites he was hoping to reserve were unavailable when he obtained the permit and so he chose reasonable alternatives instead; he figured we might be able to swap out a few sites when we collected the permit in-person. Sure enough, when we picked up the permit at the Moose Visitor Center the day before our trip began, we were able to score every site we had hoped for. Yahoo!


Alan is a firm believer that adventures should be as human-powered as possible...which is one of the reasons I appreciate Alan as an adventure buddy. As we planned to backpack the Teton Crest from point-to-point, Alan suggested we close the loop by bicycling from the exit point (at String Lake) back to the entry point (at Teton Village*) where we would park the van. Doing so would turn our 48-mile one-way backpacking trip into an 86-mile loop, 38 miles of which would be traveled on two wheels. The day before we set out on foot, we drove to String Lake and locked our bicycles to a bike rack so they would be available to ride as soon as we finished the Teton Crest Trail a week later. We then drove to the Teton Village, where we parked the van and began our backpacking trip. 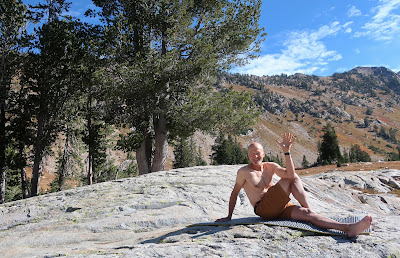 The weather had been impeccable for us — perfectly blue skies with temperatures warm enough for shorts and t-shirts during the day. Though the nighttime temperatures were certainly cooler (especially at elevation), the temps never approached freezing. In the afternoon of Day #5, we noticed clouds beginning to gather in the sky and so we assumed the weather might be deteriorating. As we approached Holly Lake, we asked some folks camping nearby whether they were aware of the forecast. Indeed they were; the forecast predicted heavy rain with potential hail. Yikes! We decided to get an early start the next morning in hopes that we could finish our hike and bike back to Teton Village before the skies opened.

We emerged from The Teton Crest at String Lake, where we were pleased to see that both of our bikes were fully present and fully intact. We rearranged our gear, moving the heaviest items from our packs into our bear containers (a bear canister for Alan and an Ursack for me). We then strapped the bear containers to our bike racks and our backpacks to our backs, hopped on the saddles, and pedaled off towards Teton Village.

Because a section of Moose-Wilson Rd was closed for construction, what could have been a 19-mile ride to Teton Village ended up being twice as long since we needed to pedal the roundabout way. We felt a few raindrops fall onto our faces a few miles shy of Jackson, but fortunately, it wasn't until our final ten miles when we finally encountered rain. We stopped, donned our rain jackets, and continued pedaling back to the van.

All in all, the trip did not disappoint in providing the experiences we had hoped for, sweetened by perfect weather and fulfilling companionship.

"Wait, wait, wait, before you go, did you see any wildlife?" you ask. Indeed. We saw lots of deer, some pika, some fish...and one bear.

* NOTE: Our backpacking route technically began at the Granite Canyon Trailhead. However, as both the trailhead and a section of Moose-Wilson Rd were closed for construction. we began our backpack trip instead at nearby Teton Village.