Located at the southern tip of South America, the Patagonia region stretches across both Chile and Argentina. Within Patagonia, there are two popular cycling routes: Ruta 40 and Ruta 7.

The first, Ruta 40, runs through Argentina. Because of its location on the east side of the Andes, the climate along this route is desert-like, and the terrain is, in my opinion, less-than-interesting. Ruta 7, on the other hand, runs through Chile. Because of its location on the west side of the Andes, the climate is more temperate, and the terrain is much more varied--think lush rainforests, glaciers, and fjords. Whenever you see gorgeous photos of Patagonia, chances are high that you are looking at the Chilean side of Patagonia. I wanted to see those gorgeous views with my own eyes, and for this reason, I chose to bike Ruta 7 through Patagonia. 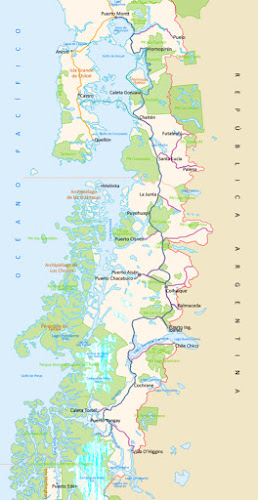 Construction on the Carretera Austral began in the mid-1970s under the dictatorship of Pinochet. (Not surprisingly, the road was originally called "Carretera General Agosto Pinochet.") General Pinochet wanted to build the road as a means of accessing remote villages in the south. Without a road through Southern Chile, access to these villages was highly restricted; air and sea access was complicated by extreme weather conditions, and access through Argentina was complicated by political matters.

As you can imagine, construction of the Carretera was a huge undertaking, lasting numerous years and sacrificing many lives. The final segment of the road, to Villa O'Higgins, was only finished in the year 2000. And that only completed the gravel construction of the road; efforts to pave the route have been ongoing ever since. As of present, only about 300 km of the route is paved. The rest of the road is in some state of "offroadedness."

My friend Eric (of In Search of the Green-Tailed Towhee fame) first introduced me to the Carretera Austral a few years ago. He loosely proposed a three week trip to bike the Carretera. But three weeks didn't seem like adequate time to me. Ever since then, the thought of doing this ride had been floating around in the back of your mind. Every photo I saw and every story I read about Patagonia made me more and more curious about riding the Carretera.

As the first stretch of the Carretera took us through rainforests, our ride was quite damp. In the middle of the wilds of Patagonia, dry places in which to escape the rain were difficult to come by. The very few shelters along the route were well evangelized by other cyclists, who in passing would mention, "There's a small roadside refugio 30 kilometers up the road, and another 20 kilometers beyond that is an empty cabin where you can spend the night."

The small roadside refugio was easy to spot.

The empty cabin was a bit more of a challenge. The turnoff to the empty roadside cabin was noted by a small tire and an even smaller sign with a bicycle on the side of the road. We kept our eyes glued to the roadside in search of this turnoff.

The first to arrive to the cabin, we crossed our fingers that we'd have the whole shelter to ourselves. We spread out our gear to dry, and we made a cup of tea to warm our shivering bodies. As the afternoon progressed, though, more and more travelers arrived. We kept moving our possessions to a smaller and smaller corner of the cabin to make room for the others. By nightfall, there were thirteen cyclists at the cabin. When it was time to fall asleep, we shared the inside of the cabin with three French cyclists, while another Frenchman and seven Germans slept in their tents outside.

The cabin was equipped with a fireplace. Given the dampness of the rain forest, dry wood was in small supply. Fortunately, there was one large chunk of wood that previous cyclists had left under the cabin's overhang. This wood provided much-appreciated warmth for about 45 minutes, just long enough for us to thaw our toes and fingers.

The next morning we came across a "Danger" sign. We'd seen many of these signs during our trip, but figured they'd been left behind, as we couldn't identify the associated dangers. But this sign offered a legitimate warning. Off in the distance was a landslide that had blocked the road. Fortunately, a crew was working to clear the path.

After waiting about a hour, we were allowed to pass. Wearing grave looks of concern on their faces, the construction crew urged us to pass as quickly as possible. The narrow path they had cleared for us looked sketchy, as if the slide would reawaken at any minute. There is no way in hell that a work crew in the United States would have let folks pass by this slide; it was way too unstable and there was way too much potential for liability. With racing hearts, we pedaled as quickly as we could and continued along our way.

One hundred km into the Carretera, we encountered another ferry. The late day ferry ride enabled us to camp on the water in Puerto Yungay. We had the whole beach to ourselves. Ah!