The theme of the last nine days has been Chilean towns that start with the letter "P": Porvenir, Punta Arenas, and Puerto Natales.

Having finished crossing Tierra del Fuego, we spent one night in a hotel in Porvenir, on the far west side of the island. The ferry that was to take us across the Straits of Magellan to Punta Arenas didn't operate the following day. Being the frugal tourists that we are, we spent the next night sleeping on the benches outside the ferry terminal. We were entertained by the longshoreman as they loaded large containers of fish onto ships. The precision with which they operated their forklifts was incredible!

Later the next afternoon, we boarded the ferry for the twenty kilometer crossing across the straits.

We spent the next two nights in Punta Arenas, on the mainland, to resupply and take care of some other need-to-dos. We camped in the yard at Hospedaje Independencia, where we were all super impressed by the owner, Eduardo. His hospitality went above-and-beyond and set a very high bar for our future hostel stays. 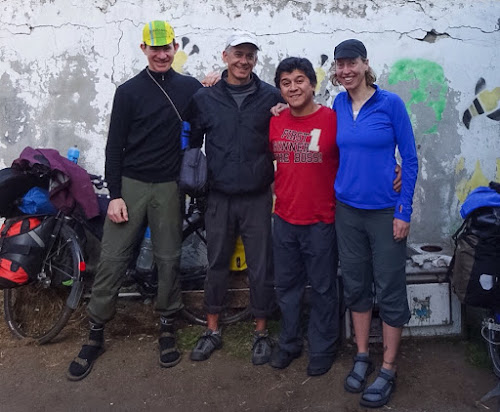 After leaving Punta Arenas, we spent four days biking north to Puerto Natales. The four days of pedaling were primarily a means of getting from Point A to Point B, as there weren't any thrilling points of interest along the route.

One particular 15 kilometer stretch across a wide-open valley was absolutely hellacious. For what seemed like eternity, we struggled to keep control of our bicycles. The crosswinds were coming from our left side, doing their best to shove us off the paved road. We sloppily wobbled along the yellow line. Whenever we sensed a strong gust approaching, we'd grab hold of the handlebars even tighter and hope we didn't get pushed off the road onto the gravel shoulder. In the instances in which the wind got the better of us, which it often did, it took a massive amount of energy to turn the handlebars into the wind and make the jump back onto the pavement. If we managed to avoid getting blown off the road, then we were often jerked into the traffic lane as soon as a truck sped by or as soon as the gust halted its display of power.

As we cycled into the wind, I kept repeating a mantra: "Let the wind blow through me." Imagining myself as a screen, allowing the wind to pass through me, helped to diminish the intensity of the winds. I thought of my friend, Tony, who likes to counteract winds by saying, "I am the wind." I tried this, too, but it didn't work so well. Quite frankly, if I was the wind, I would choose not to be blowing; it's just too tiring.

For the most part, I felt that our battle against the winds on Tierra del Fuego had broken us into the wind; it was a sort of boot camp. The winds are now something we have become accustomed to dealing with on a daily basis. On the bright side, at the times when the wind is calmer, we are impressively strong riders.

Even then, we only find ourselves traveling about 50 kilometers a day (about 30 miles), though we are easily expending the same amount of energy that it would take us to travel 70 or so miles with a loaded bike in "normal" touring conditions. We've heard that many cyclists who ride from north to south easily cover an average of 100-130 kilometers per day. We can only laugh when they complain of the winds -- they ain't got no idea.

What helps to pass the kilometers is to watch the clouds in the sky. They are absolutely mesmerizing.

Watching the wildlife helps to pass the miles, too.

Admittedly, watching Tío Ramón is just as amusing as watching the wildlife.

Finally, after a well-deserved descent, we arrived into the Puerto Natales. The town is regarded as the gateway to Torres del Paine National Park.

Though an adorable town at the southern end of the Patagonian fjords, we were turned off by the hordes of backpackers and other tourist-types. As such, we minimized our stay in town to just one night.

While in Puerto Natales, we shopped for eight days of provisions, as we figured it would take us just over a week to enjoy Torres del Paine and to bike further northwards to the next sizable town with services. The shelves at the supermarket were well picked over, particularly those containing foods that were ideal for multi-day trekking.

Speaking of food, we find that our metabolisms have changed quite a bit since our first days on the trip. The same amount of food that sustained us through eight days of crossing Tierra del Fuego is now only lasting three days.

As for me, I try to bulk up a bit before going on long tours because I know that despite the incredible number of calories I devour, I always seem to end a trip looking a bit on the too-thin side of the scale. Already, the cottage cheese on my upper thighs has nearly disappeared. The extra inches on my waist are starting to disappear as well. In another month or two, I'll be one bra cup size smaller. Bike touring beats an diet--hands down.

Though our hostel in Puerto Natales, Casa Lili, seemed quiet when we arrived midday, the place became more crowded as the day progressed. El Mecánico and I were so peaved by the overcrowded and rowdy hostel that we woke at 5am the next morning, packed up our tents, and headed down to the waterfront for our morning coffee/tea. (Tío Ramón, whose earplugs kept him sane, met us at the waterfront a few hours later.) El Mecánico and I were treated to a beautiful morning sky and a solitude enjoyed only in the wee hours of the morning in a touristy place.

Tomorrow we will head towards the snowy peaks of Torres del Paine.