The Van of Valpo & Pussy Terror

After our two-month cycling trip through Patagonia in early 2016, El Mecánico and I spent six weeks living in Valparaíso. Though two years have since passed, it's time to tell you about The Van of Valpo & Pussy Terror.
During our weeks in Valparaíso, El Mecánico and I settled into a wonderful routine. In the mornings, we worked independently on our own projects. In the afternoons, we meandered together through the Chilean city's tangled cobblestone streets, staircases, and alleys.

Valparaíso's homes and buildings, cloaked in a patchwork quilt of colors and adorned with eye-inticing murals, are the epicenter of the city's Bohemian culture. As we walked through the city, we searched every wall and nook'n'cranny for our favorite murals. Our mutual awe of the city's abundant effervescence inspired a unique, creative energy between me and El Mecánico. (See Valparaíso: Murals #1 and Valparaíso: Murals #2 for photographs of our favorite murals.)

On one of our afternoon strolls, we came across a van whose windows were painted an opaque white. The van was parked at the base of a dense thicket of morning glories, reaching a hundred feet into the sky. A painting on the port of the van depicted the back side of a man in a horizontal position, his head resting atop a pillow. Along the top of the van were the words "Pussy Terror."


What did it mean? Was the man sleeping? Was he dead? Why was there a gold crown floating inches above the man's head? What was "Pussy Terror"?

As we continued our walk that afternoon, El Mecánico and I wove an elaborate tale of how the mural came to be. The tale incorporated various themes from the city:

Side Note: I kid you not...there is a Chilean brand called Mohicano Jeans that offers a collection of "Denim Therapy" pants. Mohicano has infused aloe vera and nanoparticles of other hydrating vitamins, amino acids, enzymes, and antioxidants into the cotton fibers of its pants to help reduce cellulite and stretch marks. Flippin' amazing (in theory)!

The tale of the Van of Vaplo mushroomed, and soon El Mecánico decided to develop the story into a comic. A few days later we returned to the van for more inspiration. Alas, the van had disappeared. But that didn't stop El Mecánico from capturing the story on paper.

As El Mecánico delved into his creative process, I was astonished by the amount of work that goes into birthing comics. El Mecánico poured hours... days... weeks... months... years -- two to be exact -- into developing the comic. El Mecánico started off painstakingly drawing each of the fifty-three panels in colored pencils. (Can you imagine the time it takes just to draw fifty-three boxes?) After awhile, El Mecánico acquired a drawing pad and software that enabled him to draw comics digitally. And so with a fancy-schmancy stylus in hand, El Mecánico once again drew all fifty-three panels...from scratch.

Two years after our trip to Valparaíso, I received a large manilla envelope in the mail. The return address belonged to El Mecánico. The envelope contained a finished and professionally printed version of "The Van of Valpo."


On the inside cover was a sweet handwritten note, thanking me for the trip and for inspiring the story. As I flipped through the pages, a smile beamed from one ear to the other. I recalled all the wonderful memories from that confetti-covered city, the many walks through its steep'n'hilly streets, and the hours of creative banter that resulted from one particular mural.

And so the comic begins: 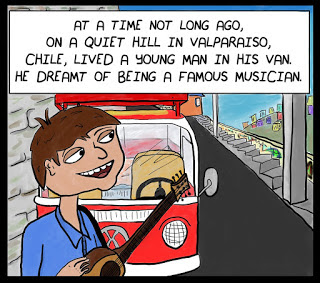 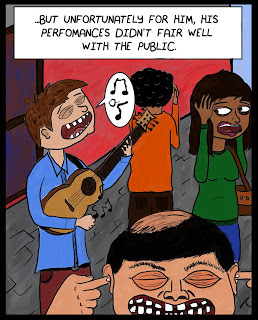 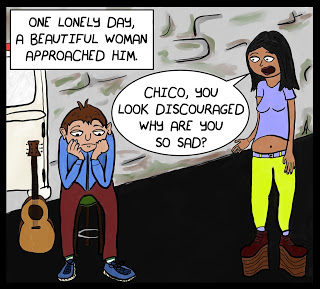 You can read the comic in its entirety on El Mecánico's blog, Mucked.

Wow, El Mecánico, you have an incredible talent! Thank you for investing so much time and energy into this project, and thank you for being willing to share your creation.
Email ThisBlogThis!Share to TwitterShare to FacebookShare to Pinterest