Imagine two people at the end of a first date. Each wants to kiss the other, but neither wants to make the first move.

This is "mamihlapinatapai." Each person wishes that the other will offer something that they both desire. But both are unwilling to offer it themselves. 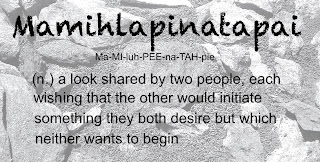 The word mamihlapinatapai belongs to the Yaghan, the indigenous inhabitants of Tierra del Fuego. The language from which the word originates is nearly extinct, as there is only one person remaining who knows the language. Mamihlapinatapai is often considered to be the most succinct word that is the most difficult to translate.

You may recall coming across this term when you studied game theory in your college economics class. Do you recall the volunteer's dilemma? This dilemma exists when all players must chose whether to make a small sacrifice that will benefit all, or whether to freeride. For example, a person is suffering a heart attack in the middle of a crowded place, but no one calls 9-1-1 because of the inconvenience of getting involved. In strategic decision making, mamihlapinatapai is the volunteer's dilemma.

What a wonderful word!

Mamihlapinatapai is also mentioned in a day's life. This is where I learned the word.

Yesterday I watched the National Geographic documentary called "Life in a Day." The documentary is a 90-minute compilation of user-generated films, all shot on July 24, 2010 and submitted via YouTube. More than 80,000 videos were created from around the world, containing more than 4,500 hours of footage.

This was a beautiful film. It showed that although the people of this world have different skin colors, wear different clothes, speak different languages, and eat different foods, we all share the common thread of humanity.

You can imagine the smile that spread across my face when the film showed Okhwan Yoon, a cyclist born in Korea. As of July 24, 2010, Okhwan had been traveling the world by bicycle for 9 years and 36 days. That is not a typo; I repeat, 9 years and 36 days!

Okhwan is travelling on a simple road bike, with just a small pack on his back. As of July 24, 2010, he had biked through 190 countries; this is six countries shy of having visited every country on Earth. Though being struck by careless drivers six times and having undergone five surgeries as a result, he continues to bike to support the vision of a more peaceful world.

This man even plans to climb Mt. Everest with his bicycle! You go, Okhwan! You make me want to travel the world by bicycle, too!

Here is the trailer for "Life in a Day":


If you are interested in watching the film, the full length version is available here.
Email ThisBlogThis!Share to TwitterShare to FacebookShare to Pinterest